Once known as the “Show Horse” Division, the 8th Armored Division proved it was a work-horse outfit in the brief time it was in combat against the Nazi military machine.

It would have been in the fight against the Wehrmacht much sooner had it not been so valuable as a training division. Before it sailed for overseas on Election Day, 1944, the “Iron Snake,” as it is now known, trained more than 50,000 officers and men, who were shipped abroad to fill gaps in eight other armored divisions.

When our tank forces took the severe mauling at Kasserine Pass, 4,000 trained replacements of the 8th Armored were shipped directly to Tunisia to help save the day, and launched the drive which pushed Rommel out of North Africa.

The 8th Armored reached France on January 4, 1945, and assembled in the Bacqueville area of upper Normandy. The German drive for Strasbourg brought a rush call for armor, and the division moved across France in the midst of a blizzard, skidding into Pont-à-Mousson three days and 350 miles later, only to find that the enemy thrust had been halted.

First taste of battle for the 8th Armored came in the Third Army’s preliminary attack against the Moselle-Saar salient, Supporting the 94th Infantry Division, Combat Command A drove the crack 11th Panzer Division out of the fortress towns of Nennig, Berg and Sinz. The end of February found the 8th Armored Division at Roermond, Holland, where it had been rushed secretly to relieve the British 7th Armored Division—part of the famed “Desert Rats” of Africa—and join the Ninth Army.

The Roer crossing was in progress, and Major General John M. Devine pushed the 8th Armored across to take Merbeck and Tetelrath. Combat Command B captured Lintfort and Rhein- berg to clean up the west bank of the river, overcoming cross-fire from panzerfausts, mortars, burp guns, mines and antitank weapons. The men of the “Iron Snake,” meeting opposition all the way, rolled through Ossenberg, Broth, Grunthal and Mill- ingen, as the Germans fought to get all possible troops and equipment across the Rhine.

The Rhine crossing was made by the Division on March 27, all men and equipment crossing within 24 hours. The 8th Armored then took on the 116th Panzer Division in its drive toward Dorsten, keypoint of the northern flank of the then forming Ruhr River pocket. Plunging past Dorsten, the 8th Armored fought through Polsum, Kirchellen, Zweckel, Buer Massel and Kol Berlich, grinding down compressed German opposition.

Came a shift in Allied plans, and the 8th Armored drove toward Soest, taking Collinghausen, Nordert and Ebbinghausen. The Division fought on into Unna, near Dortmund, and then was pulled out of combat and sent rolling 100 miles to Wolfenbuttel. From there the 8th Armored moved farther south, and soon was massed around Blankenburg, at the foot of the Harz Mountains. Following heavy air and artillery attacks in the morning, the tank-infantry assault was made, and the city was captured before dark. This was the last major battle waged by the 8th Armored Division. After V-E Day, the division moved to Chotieschau, Czechoslovakia.

There are 12 soldiers of the 8th Armored Division World War II still listed as missing in action. 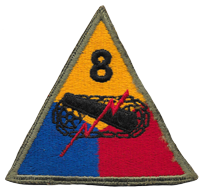