Last in and first out—that was the unique record of the “Black Hawk” Division on the Western Front. But the men of the 86th didn't expect to be finished with war when, a few weeks after V-E Day, they were rushed from Austria to the French coast and then to New York, where they were acclaimed on June 17 as the first division to return from the war.

There had been a good reason for their speedy homecoming. They were on their way to Japan. They got there with less trouble than they had originally expected; their Pacific job turned out to be not battle, but occupation.

The Black Hawks fought for only 42 days in Europe. But during that brief spell of action they earned respect from friend and foe alike for their speed, maneuverability, and courage. The 86th served under four armies—the Fifteenth, First, Seventh and Third—claimed to be the first of all our divisions to cross the Danube River, and fought with distinction in mopping-up operations in the Ruhr pocket.

Activated in December 1942, the Black Hawks trained in the United States for more than two years, and finally embarked for Europe in February 1945. Landing at Le Havre, the 86th moved across France and Germany by train and truck, finally arriving at Cologne near the end of March. There a few units of the Division saw their first action, relieving elements of the 8th Infantry Division in position along the west bank of the Rhine.

Then the Black Hawks moved south along the river, crossing it at Bonn, travelling deep into Germany, and taking such towns as Ober Veizhelde, Attendom, and Hohenlimberg, Gosseldorf, Weizemburg and Echstatt. At Echstatt, the Black Hawks liberated a large number of Allied prisoners of war.

By April 26 the Division had moved to a position just outside of Ingolstadt, close to the Danube. Under persistent enemy artillery fire, the Black Hawks drove through the city and onto the banks of the Danube, spearheading the advance of the Third Army on the river. That evening, while American tanks lined the river banks and poured shells into the enemy lines across the water, and Black Hawk mortars and machine guns threw thousands of rounds of steel into the dusk, Doughboys of the 86th shoved off from the east side of the Danube and secured a bridgehead on the opposite bank.

The Black Hawks kept pushing forward across the river until they had established positions, and then they had to fight off an enemy counterattack designed to throw them back into the water. They held their ground.

Fighting against Germans who knew the jig was almost up but still were determined not to give in without a struggle, and against Hungarian Storm Troopers whom the Nazis had thrown into the battle, the 86th moved forward through Eitensheim, Haag, Altdorf, and Nauhen, in Austria.

At the end of the war in Europe they were in Perwang, after covering ground so rapidly that they left their own kitchens far behind. But they were used to that sort of thing. One Black Hawk unit had had its chow wagon ambushed in the Ruhr pocket. Later, at Ludensheim, they caught up with the Germans who had stolen their rations, and found that the enemy still had a lot of their stuff with them. The Black Hawks got their revenge; they made the Germans eat every bit of the captured hoard—everything except the tin boxes it was packed in.

There are 1 soldiers of the 86th Infantry Division World War II still listed as missing in action. 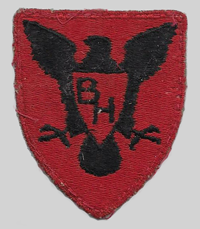