SHAEF was the headquarters of the commander of all allied forces in the Northwestern-European Theater during World War II. Formed in London in December 1943, General Dwight David Eisenhower was its one and only commander during its existence until 14 July 1945.

The first engagement for SHAEF was the execution of Operation Overlord, the invasion of Europe from England. Cross-English-channel invasion planning started as early as 1942, but the formal operation known as Overlord was diligently developed beginning in early 1943 by Lieutenant General Sir Frederick E. Morgan of the British Army. It would be Eisenhower (Ike) and various teams that would put their stamp on and execute this plan. Ike built a team comprised of both British and American leaders intermixing and even alternating which nation would be the lead in each sub-command.

On the morning of June 6, 1944 following an Airborne landing during the night and a naval barrage, landing craft delivered men of the US and British Armies to the beaches of Normandy began the invasion codenamed Operation Neptune. During the landings and initial phase of operations, Ike assigned Field Marshal Montgomery to be the land forces Commander. It would be August when SHAEF moved from England to France and at that time Montgomery was relieved of this command to focus all his attentions on 21st Army Group comprises of British and Canadian Armies.

At its apex SHAEF commanded the largest forces ever assembled in one theater of war.

The three army groups under SHAEF would move across France and the low countries abreast pushing the German Army back into Germany and the enemies final destruction. The left flank fell under the responsibility of Montgomery and 21st Army Group. The right or southern by Devers' 6th Army Group and the center fell to 12th Army Group under Gen. Omar Bradley.

SHAEF Headquarters moved as did the front; beginning in London followed by stops in Versailles, France, then Reims and finally Frankfurt, Germany on 26 May following Victory in Europe.

On 13 July 1945, General Dwight Eisenhower delivered to the combined Chiefs of Staff for the allies a report detailing the "Operations in Europe of the Allied Expeditionary Force" for 6 June 1944-8 May 1945. The complete report can be read here. 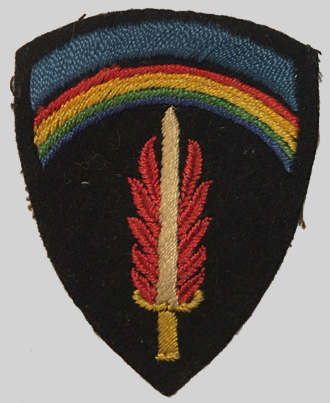 eNewsletter Signup
For Email Newsletters you can trust.