The Battle of Guadalcanal was part of the Guadalcanal campaign that comprised fighting on Tulagi, Florida and Guadalcanal in the southern Solomon Islands along with sea battles surrounding the area. In the first campaign to take back territory captured by the Japanese, United States Marines led by Major General Alexander Vandegrift landed 7 August 1942. The offensive surprised the Japanese and the Marines of the 1st Division captured the airfield that was under construction later renaming it Henderson Field after Lofton Henderson a marine aviator killed at the Battle of Midway. The enemy made repeated attempts to recapture the field but were unsuccessful.

Upon the initial landings the Marines did not get all of their provisions ashore because of bad weather and enemy air attacks on the ships but that did not deter the men. The 11,000 Marines on Guadalcanal initially took up defensive positions around Lunga Point and the airfield and using captured Japanese equipment set about finishing the airstrip. By the 18th of August the airfield became operational and supplies of food and arms began to arrive.

The 1st Marine Aircraft Wing and aircraft such as Marine Grumman F4F Wildcats established a home base on Guadalcanal and by September what became known as the Cactus Air Force continued to grow and the Japanese air attacks dwindled. Growing the airfield prevented Japanese troop resupply during the day, so they focused on nighttime transport that the U.S. named the Tokyo Express. During this time General Vandegrift strengthened the Lunga perimeter relocating the 1st Raider Battalion and 1st Parachute Battalion placing them under the command of Lt. Colonel Merritt A. Edson. Edson's Raiders as they would become known disrupted a planned enemy attack and captured a lot of intelligence material. This formed the basis for marine deployment along Lunga Ridge located south of Henderson Field. In fierce even hand to hand combat the Marines eventually stopped an enemy effort to recapture the field. Lunga Ridge became known as Edson's Ridge.

The Japanese knew the strategic value of Guadalcanal and Henderson Field and would continue their attacks. Then they planned a major operation to recapture the field in late October. The Battle for Henderson Field. During early October 15,000 Japanese troops landed on Guadalcanal bringing the enemy total to some 20,000. The official battle began on the evening of the 23rd with a light force of the enemy destroyed by the marine defenders.

Beginning on the 24th and continuing for a couple days the Japanese made many frontal assaults against 1st Battalion, 7th Marines under Lt. Col. Chesty Puller and 3rd Battalion, 164th Infantry Regiment, Americal Division of the US Army under Lt. Col. Robert Hall. The defenders repulsed the enemy and inflicted significant damage to his troops. The battle ended on the 26th.

There was always action in various parts of Guadalcanal and in November, Vandegrift sent six Marine battalions and one Army battalion on the offensive in an operation commanded by Edson to the Point Cruz area. During this time the Americans discovered a Japanese force near Koli Point located on the eastern side of the Lunga perimeter. Attacking the enemy they took control of the area driving many of the enemy into the jungle. At the same time two companies from the 2nd Marine Raider Battalion under the command of Lt. Colonel Evans Carlson landed at Aola Bay, 40 miles east of Lunga Point. Known as Carlson's Raiders they along with men of the 147th Regiment, US Army they were to provide security for Seabees that were to construct another airfield at this location. Carlson would then shift his men to the retreating Japanese from the Koli Point, they would chase the enemy for 29 days.

After November, the Japanese would not be able to attempt any more larger operations on Guadalcanal and began to draw up withdrawl plans. The campaign officially ended on 9 Feburary 1943. 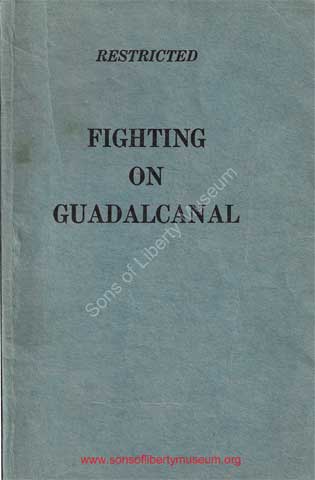