The Combat Infantry Badge (CIB) was established by the War Department on 27 October 1943. Lieutenant General Lesley J. McNair, then the Army Ground Forces commanding general, was instrumental in its creation. He originally recommended that it be called the "fighter badge." The CIB was designed to enhance morale and the prestige of the "Queen of Battle." Then Secretary of War Henry Stinson said, "It is high time we recognize in a personal way the skill and heroism of the American infantry." Originally, the Regimental Commander was the lowest level at which the CIB could be approved and its award was retroactive to 7 December 1941. There was a separate provision for badge holders to receive a $10 per month pay stipend, which was rescinded in 1948. From the beginning, Army leaders have taken care to retain the badge for the unique purpose for which it was established and to prevent the adoption of any other badge which would lower its prestige. At the close of World War II, our largest war in which the armor and artillery played key roles in the ground campaigns, a review was conducted of the CIB criteria with consideration being given to creating either additional badges or authorizing the badge to cavalry and armor units. The review noted that any change in policy would detract from the prestige of the badge.

The definition of requirement to be "engaged in active ground combat" has generated much dialog over the years as to the original intent of the CIB. The 1943 War Department Circular required infantrymen to demonstrate "satisfactory performance of duty in action against the enemy." The operative words "in action" connoted actual combat. A War Department determination in October 1944 specified that "action against the enemy" for purposes of award of the CIB was to be interpreted as "ground combat against enemy ground forces." In 1948, the regulation governing badges stipulated that "battle participation credit is not sufficient; the unit must have been in contact with the enemy." This clearly indicated that an exchange of hostile fire or equivalent personal exposure was the intent of the Army leadership. In 1963 and 1965 HQDA messages to the senior Army commander in the Southeast Asia theater of operations authorized award of the CIB to otherwise qualified personnel "provided they are personally present and under fire." U.S. Army Vietnam regulations went so far as to require documentation of the type and intensity of enemy fire encountered by the Soldier. The intended requirement to be "personally present and under fire" has not changed.

The specific eligibility criteria for the CIB require that an officer (SSI 11 or 18) in the grade of colonel or below, or an Army enlisted Soldier or warrant officer with an infantry or Special Forces MOS, who subsequent to 6 December 1941 has satisfactorily performed duty while assigned or attached as a member of an infantry, ranger or special forces unit of brigade, regimental, or smaller size during any period such unit was engaged in active ground combat.

Subsequent awards of the CIB may be awarded provided the Soldier has met eligibility criteria in separate Qualifying Periods/Eras. For example, a second award with superimposed star on the wreath could be awarded for a Soldier who served in Somalia (3d Qualifying Era) and OEF (4th Qualifying Era).

Many awards of the 2nd CIB (single star above wreath) were awarded for men from the WW2 and Korean Wars and then the Korean-Vietnam conficts. However, having 2 stars on the CIB would denote 3 conflicts: WW2-Korea-Vietman. These would have the soldier age into their 40s when in Vietnam. This 2-star award is probably the most rare of awards as less than 250 have been awarded making it more rare than the Congressional Medal of Honor. The CIB is one of the most esteemed Army awards.

We are honored to have a number of uniforms in our collection belonging to men who were awarded 3 CIB's. 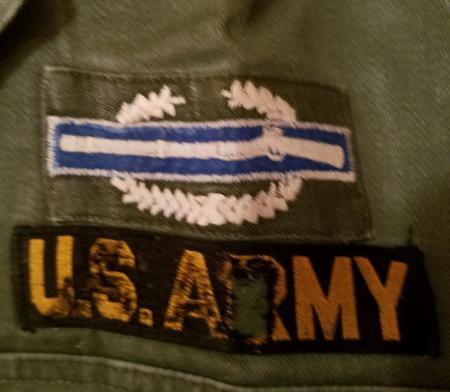 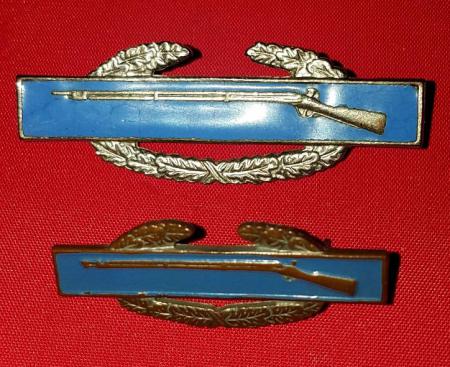 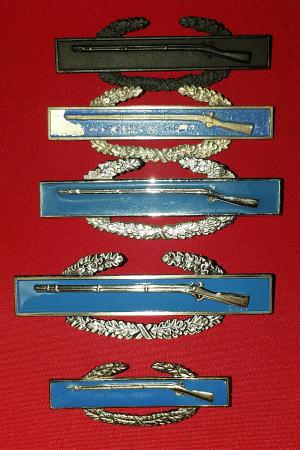 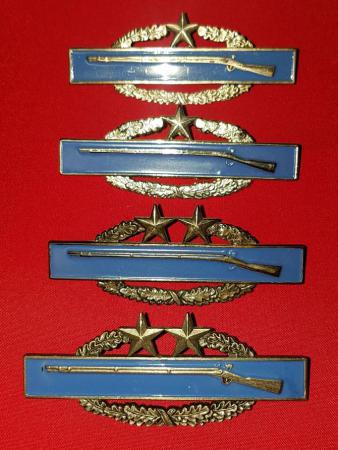