The shoulder Patch of the 89th (“Rolling W”) Infantry Division is no novelty to the German people. They became acquainted with it in World War I when the Middle West Division (invert the “W” and it becomes an “M”—see?) occupied a section of their country very near the area now being patrolled by the Doughboys wearing the same insignia.

The 89th didn’t see as ‘much action against the Nazis as the Rolling Ws did against the Kaiser’s forces, but during the brief time its men were in the line they upheld the outfit’s slogan “Get It Done.” Once committed, they really rolled, and by the time of Nazi capitulation had advanced a total of 350 miles. In this drive the 89th overran scores of Nazi cities, captured more than 20,000 prisoners, and held its own casualty figures to less than 900.

The Division left the United States in January 1945, but did not enter combat until March 12. It was sent into the line near the Sauer River, east of Echtemach, and its first shots were fired on enemy soil. No battle-hardened troops ever moved any faster, or attacked more relentlessly, than did the line companies of the 89th. In their first three weeks under fire, the Rolling W Doughboys advanced some 50 miles to the west bank of the Moselle River. On the morning of March 16 the Doughs, in assault boats, stormed across the river to establish a bridge head through which the 11th Armored Division passed to begin its battle toward the Rhine.

After clearing an area between the Moselle and Gian Rivers, the 89th moved to a new sector for a crossing of the Rhine between the towns of Kestert and Kaub. By noon of March 26, the Rolling Ws had established three bridgeheads, and within a week had completed mopping up in the rough wooded area of the “Bingen Bulge.”

Early in April, the 89th moved northeast to start a drive into Thuringia.

Eisenach was the first city to fall, after a bitter defense by SS troops. In the next two weeks the Division moved rapidly across central Germany to the Zwick-Mulde River. The 89th liberated many Allied prisoners in this advance. At Blanken- burg 330 Polish women officers were freed. The capture of Zwichau late in April ended the advance, and the Division passed to control of the First Army.

On V-E Day, the Rolling Ws were pushing into Czechoslovakia.

There are 10 soldiers of the 89th Infantry Division World War II still listed as missing in action. 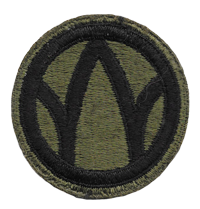