The Acorn is a traditional symbol of strength, and before the wearers of the Golden Acorn were through in Europe they had convinced the Germans that the symbolism was more than justified. The Division with the slogan “Stalwart and Strong” had shown itself to be both.

Sailing from the United States on November 1, 1944, the 87th arrived only three weeks later near Metz, on the Third Army front, where General Patton planned to give it its baptism of fire. But Marshal Von Rundstedt changed those plans with his counteroffensive. When Patton rushed over to help the First Army repel the onslaught, the 87th was one of the divisions he took with him to smash the drive. They moved close to where the battered remnants of the 106th Division were reassembling. “When we saw what had been done to them,” one 87th man said, “our outfit got together and started working as a team.”

By February the 87th was a veteran outfit, used to the tricks of the Germans and accustomed to the bitter climatic conditions on the winter front. Then the Golden Acorns were picked as the spearhead for a Third Army drive toward Luxembourg across the Our River. Under heavy fire from the enemy, the Doughboys crossed the river and drove forward.

During the remainder of February and March, the Division consolidated its earlier gains and continued to strike lethal blows at the enemy. Early in April the 87th launched a new major thrust.

Moving with lightning speed, the Golden Acorns leaped the Moselle River and charged down on Coblenz. Before the Ger-mans knew what had happened, the city had fallen to the 87th, and the Third Army’s drive into the heart of the Rhineland had started. Reaching the Rhine, the 87th once more was in the forefront of battle, and once more it was assigned the job of pushing its way across a river.

This time it wasn’t so easy. As the first wave of troops began to sneak across on small boats, the Germans on the opposite shore threw up flares. By their weird light, the enemy hurled in heavy and accurate concentrations of mortar fire on the advancing Americans. Casualties were heavy, but the 87th wouldn’t stop. By grit and courage the Golden Acorn soldiers forced their way over the Rhine and pressed forward on the opposite bank.

The Division took many German cities, and the last of the lot was the internationally known sporting resort of Oberhof, in the Black Forest, which the 1st Battalion of the 347th Infantry seized just before the war in Europe ended. “We arrived too late for the skiing and skating,” one Golden Acorn Doughboy reported mournfully a few days later, “but the shooting sure as hell was fine.”

There are 24 soldiers of the 87th Infantry Division World War II still listed as missing in action. 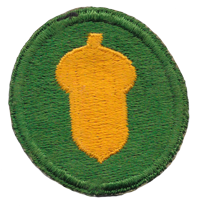