When it fought in France during the last war, the 84th called itself the "Lincoln” Division. When this war started, me men of the outfit were calling themselves the “Railsplitters.” But not long after they bumped into the German Army on the Seigfried Line, the Nazis had a new name for them—and it had nothing to do with the biographical background of Abraham Lincoln.

The Germans called them the Hatchet Men.

It was November 18, 1944, when the 84th first struck. Only a few weeks before it had been in the United States. After sailing to England and training at Winchester—where a few men were detached to go to the Continent and help speed supplies over the famous Red Ball Highway—Railsplitters embarked for France and were rushed to the Siegfried Line. Then began two months of savage fighting during which the 84th took 112 German pillboxes and bunkers in the Siegfried Line, and helped to crush Rundstedt’s counteroffensive in the Ardennes. It was as notable a start as any fighting outfit could hope to have.

Assigned to the British Second Army, the 84th set its sights upon Geilenkirchen, a mining and transportation center with a population of 20,000. The 334th Infantry jumped off first, with Prummern as its objective. The regiment was supposed to have armored support, but its tanks bogged down in the mud. This didn’t stop the Doughboys; they went in anyhow. Then the 333d Infantry joined in the fray, and Geilenkirchen fell on tie 19th shortly followed by Suggerath, Lindem, Beeck, and—in one of the war’s best examples of infantry-artillery teamwork-Leiffarth. As the 84th pushed toward this city, the Infantry moved forward confidently a scant 50 yards behind the crashing shells of its own big guns. Mullendorf was the scene of the Railsplitters’ last operations in the Siegfried Line sector, and the campaign was fittingly concluded when a battalion commander strode out of Nazi headquarters puffing a big cigar, with a captured swastika slung over his shoulder.

On January 2, while the German counteroffensive in the Ardennes was at its height, the 84th was rushed back to help and made a gallant stand south of Marche. With no flank support, the Railsplitters held their ground and beat off one fierce enemy thrust after another. Shifted later to the north side of the German bulge, under the First Army, the Division set off a counterattack with the 2nd Armored Division. Snow temporarily stopped most of the “Hell on Wheels” tanks, but it couldn't stop the Infantry. One bunch of Doughboys—the 1st Battalion of the 335th Infantry—made an urgent request for hundreds of suits of long winter underwear. Donning these over then-combat uniforms, they sneaked across the white fields and took the enemy completely by surprise. By January 16 the 84th had rolled into Houffalize, and on that day, near Ourthe, one of its units joined up with the 11th Armored Division—thus officiallv linking the First and Third Armies and closing the gap that had separated them in the Ardennes salient.

Moved secretly to an assembly area in Holland, the Railsplitters swept across the Roer River on February 23, and then, led by a motorized task force built around the 334th Infantry, thev roared forward—overrunning a German officers’ replacement pool, not even bothering to stop to take many prisoners, capturing one city’s whole police force intact, taking Dulken, Krefeld, and Moers, and ending up at the Rhine. They almost got to the other side via a tunnel connected to a mine shaft at Homburg, but the tunnel had been mined. After crossing on the surface, they went on over the Weser River, took Erbeck, captured a Nazi arms factory built 350 feet into the side of a cliff, and drove into Hannover. Farther on, at Brunswick, they consolidated forces withe 5th Armored Division, and the two outfits joined the British to wipe out an enemy pocket along the Elbe south of Hamburg.

After V-E Day, with headquarters at hannover, the Railsplitters spent weeks trying to help displaced persons get started on their way home.

There are 41 soldiers of the 84th Infantry Division World War II still listed as missing in action. 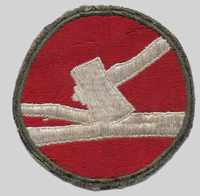