For the men of the 7th Infantry Division there is no such thing as unseasonable weather for Jap killing. They have slain the Nips in the sub-zero cold of the Arctic regions, and they chopped them down when it was hitting 125 in the shade of palm trees. After the war was over, they went on to police them in Korea.

From Attu’s bleak wastes to the lush jungles of the Pacific the men of the “Hourglass” Division have ranged in search of the enemy, and in doing so have earned two major honors.

At Attu the 7th gained the distinction of recapturing the first American soil taken by the Japanese. And at Kwajalein in the Marshall Islands the 7th, with the 4th Marines, won the honor of first wresting from the Japanese ground he held prior to Pearl Harbor.

The 7th, which was activated in 1940 under the command of then Major General Joseph W. Stilwell, started its battle against the Nips in May 1943, when its men hit the beaches of Attu. For three weeks, in weather that would have broken the spirit of many an Arctic explorer, the 7th was in bitter combat with the enemy. The battle spread into the mountains and into the valleys, and it was not until May 30, when the Japanese threw their all into a fanatical banzai attack that failed, was the battle for the Aleutian stronghold ended.

Three months later elements of the 7th assaulted Kiska onlv to find that the enemy had fled a few days earlier.

The Hourglass boys shipped from the Aleutians to Hawaii, where they underwent months of rigorous training in preparation for their try at jungle fighting. Early in 1944, the 7th swarmed ashore at Kwajalein, in the heart of the Jap-held Marshall Islands. Six days later the Stars and Stripes was flying over the atoll—and the Japs had lost their first territory of the war.

It was on Leyte that the men of the 7th really started killing Japs. On D-day, October 20, the Hourglassers hit the sand near the town of Dulag and found themselves opposed by one of the crack Japanese divisions—the 16th, perpetrators of the “Bataan Death March.” Fighting for every foot, the 7th drove inland, and within four days had captured Dulag, its important airstrip, the San Pablo airfield, and the city of Burauen. Swinging north, the Hourglassers plowed through the rice paddies, waist-deep mud, and monsoon gales to crush Jap resistance and overrun Jap defenses at the key town of Dagami.

But MacArthur gave them little rest. He turned the Division south and told them to eliminate all the enemy from the Leyte watershed as far south as Abuyog. This mission was accomplished under the most adverse weather conditions. The men were pelted by torrential rains, blown down by winds of typhoon velocity, and had to fight flash floods and swollen rivers and streams.

The 7th finished its chore in the Leyte campaign by landing on the Camotes Islands and exterminating all the Japanese on this group. The 7th moved 105 miles on Leyte, covered 1,950 miles in reconnaissance, and killed 16,559 of the enemy.

But the toughest fight for the 7th was yet to come. On Easter Sunday the men of the Hourglass patch landed on the west coast of Okinawa and started a drive across the island. There they met the most intense artillery fire of the Pacific war, and the most stubborn enemy defense. One of the bloodiest battles of the war saw the 7th assault Hill 178 for six days before taking this anchor position in the defense line. When Okinawa was conquered and General Stilwell came to assume command of the Tenth Army; he found his old division—the 7th—waiting for him with a combat record unsurpassed by any fighting unit in the Pacific.

There are 69 soldiers of the 7th Infantry Division World War II still listed as missing in action. 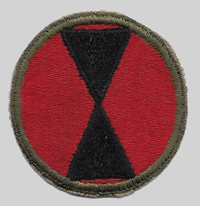