The Doughboys of the 70th (“Trailblazer”) Infantry Division wear an axe blade on their shoulder patch, and they were axemen to the Wehrmacht in Europe.

From the time they plunged into the European conflict in December 1944, until the Nazi capitulation, the Trailblazers never took a backward step. One of the Division’s memorable moments came less than two months after its men had landed at Marseille. In February, working in concert with other Seventh Army outfits along the Alsace-Lorraine border, the Trailblazers launched a drive that culminated in the capture of Spicheren Heights, known to Nazis as “Hitler’s Holy Ground.”

It was at this point, a famous spot in the Franco-Prussian War of 1870, that Hitler first set foot in France following his accession to power. On Christmas Day, during the “phony war” of 1939, Der Führer cautiously advanced a few yards into France and spoke a few words to his followers.

Spicheren Heights overlook the town of Styring-Wendel. In liberating this French city, the Trailblazers also freed nearly 1,000 Allied prisoners of war, predominantly Russian, but including Poles, French, Czechs, and Yugoslavs. This was one of the first, if not the first, deliverances of Allied POWs on the Western Front.

Early in March, a resumption of the offensive carried the 7Oth to the south bank of the Saar River, and two of its Infantry regiments—the 276th and 274th—claim the honor of having first out men across the vital stream. On March 20 the city of Saarbrucken fell to the 275th Infantry. At the same time the remaining Trailblazer units swarmed through the formidable Siegfried line defenses along the north bank of the Saar to take Volkingen and other important Saarland cities and towns.

Late in March advance elements of the 70th met men of the £6th Infantry Division and effected their junction with the Third Army.

The Trailblazers first saw combat on December 28, 1944, when the three regiments were committed in defensive positions along the west bank of the Rhine in northern Alsace. Once in the line, the Doughs of the 70th took part in some of the bitterest actions of that portion of the German offensive (simultaneous with the Ardennes breakthrough) which saw the Nazis attempt to drive south from the Bitche sector in the hope of cutting off the entire Seventh Army, west of the Saverne Pass.

In this action, it was often a battle by battalions.

At Wingen, a village in the mountains south of Bitche, Trailblazers surrounded and sealed off 1,000 SS troops, and cleaned them out in a hard three-day battle. This broke the point of the northern prong of the German drive. The men who did this job were men who had been on European soil less than a month.

After the reduction of the Saar Basin, troops of the 70th engaged in occupational duties at Otterberg, Bad Kreuznach, Frankfurt, and Oranienstein, near Limburg-on-Lahn.

There are 12 soldiers of the 70th Infantry Division World War II still listed as missing in action. 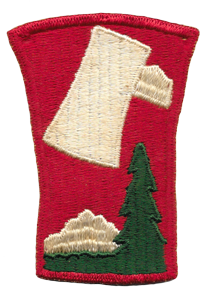