In World War I the 6th Division was in so many engagements and made so many long marches about France that it was nicknamed “The Sight-Seeing Sixth.” The 6th in World War II did a pretty good job of upholding that reputation. Its six-pointed star shoulder patch has been seen throughout the Pacific, from Hawaii to the far reaches of Japan.

No division had a tougher assignment in the recapture of the Philippines than the 6th. It landed at Lingayen Gulf, Luzon, on D-day, January 9, 1945, and immediately took to the hills in pursuit of the Japs. While most of the other invading divisions were working on fairly flat terrain, the 6th was in the mountains, hacking away at the formidable Nip positions. Not until the Okinawa campaign did American troops get as much artillery as was poured on the 6th from the Japanese mountain guns.

But the 6th kept rolling the enemy from peak to peak. In the first month of the campaign the Sightseers killed 5,000 Japs, and during the fierce battle around Munoz they knocked out 57 Jap medium and light tanks and destroyed a formidable number of artillery pieces. General Walter Krueger, Commanding General of the Sixth Army, commended the Division for its magnificent performance in this engagement.

Shortly after this battle the 6th’s commander, Major General Edwin D. Patrick, was killed by mortar fire while up front with his troops.

The 6th’s first mission in this war was the defense of Oahu. The Division reached the Hawaiian Islands in 1943 and relieved the 27th Division of the defensive positions in the southern sector. Later, it took over the defense of the entire island.

In January of 1944 the 6th set sail for Milne Bay, New Guinea, and five months later moved on to the ToemWakde area in Dutch New Guinea. In July the Sightseers went into action west of Toem and met and defeated the Japanese in the bloody battle of Lone Tree Hill. This victory was a major one because it secured the Maffin Bay area for the Americans.

With little or no rest, the 6th went into action again. This time the men with the six-pointed star made a landing at Sansapor on the Vogelkop Peninsula in the Netherlands East Indies. Striking swiftly against a surprised Japanese garrison, the 6th rapidly secured the Sansapor coast from Cape Weimak to the Mega River. The Division, in its lightning stroke at Sansapor, captured many prisoners.

The 6th garrisoned this area until late in the year when it joined the vast armada that sailed against Luzon. During the Luzon campaign the men of the 6th established a Pacific record for continuous duty in the line, serving well over a hundred days before being relieved and given a rest at a back area.

There are 34 soldiers of the 6th Infantry Division World War II still listed as missing in action. 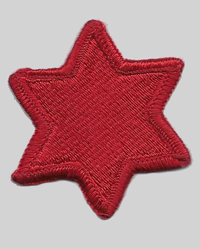