The 16th Armored Division averaged 8,000 prisoners per day while it was in combat.

But it was only in combat one day.

That will always be a memorable day for the men of the 16th. Swarming into Piisen, Czechoslovakia, after long moves across the continent of Europe, the 16th Armored decisively captured the city famed both for its beer and as the seat of the Skoda munitions works.

There was only one jarring note to the last-minute triumph. Allied bombers, seeking out the Skoda plants, had inadvertently hit the beer factories as well.

The 16th Armored arrived in France on February 5, 1945, and was subsequently assigned to the Third Army. Traveling to Nürnberg, the division got there on April 28 for final precombat training. On May 4 it ieaped to Waidhaus, SO miles away, and two days later launched its attack on the l>eer city, at the far end of the American line of penetration into Czechoslovakia.

After its brief flurry of combat, the 16th Armored had the trying job of herding together German soldiers and civilians attempting to flee from the Russian forces in Prague.

One well remembered tank of the 16th Armored never dirl fight at all. Separated from the division in France when the railroad car on which it was lashed had to be side-tracked, the tank and the crew set out determinedly to rejoin their outfit. The tank men raced from France to Belgium, into Luxembourg ancl Germany, and on into Czechoslovakia. Finally they rumbled into Pilsen.

But by the time they got there the war hud ended. 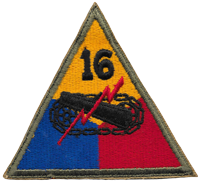