The 13th Armored (“Black Cat”) Division was one of the last outfits to clear this country for overseas combat, but in the little time the Black Cats were in action they clawed and scratched and bedevilled the Nazis just as efficiently as any of the older and more experienced outfits.

The Black Cats didn't leave this country for the European Theater until late January 1945, and did not get into action against the Panzers until the closing stages of the Allied drive in southern Germany. Working with General Pattons Third Army, the Black Cats were part of the relentless surge that by-passed Berchtesgaden in the race to link up with the Russians. In this drive the men of the 13th Armored were never stopped, and fought with the skill and coolness of hardened veterans.

Late in April 1945, the loth Armored was at Alterhofcn, and shortly afterward the division was across the Danube River, east of Regensburg at a point two miles southeast of Straubing.

On May 2—less than a week before the Nazi capitulation— the 13th Armored Division had hammered its way to Adolf Hitler s birthplace, Braunau, five miles from the Inn River.

It was in this closing action that a platoon of Black Cats captured a German major who was so anxious to put himself in good light with the Yanks that he gave away the location of a Nazi generals headquarters. The Yanks rolled up to the place to investigate and made quite a profitable haul -two generals with their staffs.

The experience of Lieutenant Colonel Dale E. Means of Valier, Pennsylvania, an assistant chief of stalf of the Black Cat Division, illustrates the coolness of the Cats in combat. Lieutenant Colonel Means was captured during the clearing out of Straubing, and held prisoner for four hours. He attempted to talk his captors into surrender. They refused. He then told them that his tanks and artillery would blow the town to bits. The Nazis again refused. Finally, the American said, "Let’s see the mayor.” The Nazis agreed, and the Colonel was OK, because he knew the office of the town’s No. 1 man was alreadv in Yank hands.

There are 4 soldiers of the 13th Armored Division World War II still listed as missing in action. 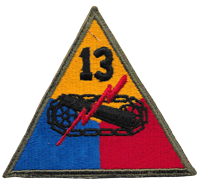