It is generally conceded that thunderbolts travel pretty fast, but nobody ever suspected that a whole armored division of “Thunderbolts” could strike as quickly as the 11th Armored Division did in the winter of 1944-45.

The Thunderbolt Division ( it shares the nickname with the 83d Infantry Division) was crossing the English Channel in mid-December, when Rundstedt launched his counteroffensive. The Allies were in desperate need of all the reinforcements they could get, and a brand-new armored division could mean a lot.

The 11th Armored hit the beaches of Normandy one morn-ing and instantly set off on a forced march, skidding into Neufchâteau, Belgium, at midnight of the same night.

The next day—just 24 hours after hitting European soil for the first time—the Thunderbolts roared into action. They had a very definite mission: to get astride the vital Neufchâteau- Bastogne highway and prevent the Germans from gaining con-trol of it. The 11th Armored jumped off in an attack, and the Germans had to revise any supply plans they had involving that critical highway.

Rarely in military history had an armored division gone into action so quickly from so far behind the lines.

Once started, the Thunderbolts kept on rumbling toward the heart of Europe. In January, they continued to fight in Belgium, and the next month, with the 6th Armored, they took Trois, Vierges and Goedange. They spearheaded the Allied drive across the Kyll River, fought through northern Luxembourg, and drove on to the Rhine, over-running Kirschweiler, Dochweiler and Winnweiler.

Swerving to the south, the Thunderbolts earned themselves new honors by becoming the first American unit to enter Austria. On their way, they paused long enough, west of Kaiserslautern, to help capture two German armies—the First and Seventh. In March, the Thunderbolts crossed the Rhine, drove toward Nürnberg, and sent two columns racing into Bavaria and finally joining up at Cham, 28 miles northeast of Regensburg and 1,200 feet high in the Alps. They captured Linz, on the Danube, and on V-E Day, were assembled at Friidenthal.

A few weeks later, while on occupation duty near Ober- donau, the Thunderbolts started reckoning up their combat achievements. In only a few months of action, they discovered, the 11th Armored had taken a total of 76,229 prisoners—an average of 600 a day and twice as many as were taken by the entire American Army during the last war.

There are 5 soldiers of the 11th Armored Division World War II still listed as missing in action. 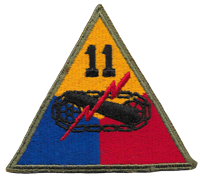