“Tokyo Rose” was at her untruthful best on her broadcast of December 7, 1944, third anniversary of the sneak attack on Pearl Harbor. In delighted tones she told of how invincible Japanese paratroopers, the evening before, had dropped on a vital airstrip in Leyte to destroy scores of planes, kill hundreds of Yanks, and capture the airfield.

No one laughed any harder at this broadcast than did the tough hombres of the 11th Airborne Division. They happened to be on hand when the Nips tumbled out in the dusk, and the ensuing battle was the first paratrooper-versus-paratrooper battle of the Pacific. It was a wild fight, there in the coconut grovés bordering the strip. Every man for himself. But in the morning the area was stippled with dead Japs, and by noon “The Angels,” as the 11th troopers are known to their commanding officer, had tracked down and destroyed every Jap who landed.

The Japs brought with them a flag, later seized in the battle, with the message “Exert your utmost for your country” embroidered on it. It was signed by Lieutenant General Kyoji Tominaga, Imperial War Minister. The flag now hangs at West Point.

The 11th landed on Leyte, 40 miles south of the capital city of Taclobân, on November 18,1944, and the fight on that island is regarded by its officers and men as the toughest of all the Division’s fights. Troopers who later waged bloody battles for Nichols Field and Fort McKinley, and who used bayonets to assault hill positions and rock caves on Luzon, claim that Leyte was the worst.

The men fought everything on Leyte. Inexperience, rain, mud, howling winds, dense jungles, rugged mountains, and a fanatical enemy. But they never took a backward step during the campaign, despite scores of suicidal banzai attacks by the Nips.

In general, the llth’s mission on Leyte was to clear the Ormoc-Burauen supply trail, the Japs’ lifeline, and to squeeze the enemy against the 7th, 77th, and 96th Division troops on the north and northwest coasts. They accomplished this, and much of their movement was done at night. For example, when the 511th Parachute Infantry was given the job of pushing through the Anas Pass, the attack was launched in the dead of night. The Japs, sound asleep in their bivouac, apparently secure in their belief that Americans did not attack at night, were wiped out before they could throw together a defense.

“The Angels” killed 5,700 Japs on Leyte by actual count, and no one will ever know how many more were blown to bits by artillery.

The 11th Airborne made a landing on Luzon, 60 road miles from Manila. Half an hour after reaching the beach the 11th had cleaned out the last Jap beachhead defender, and one of its regiments was racing down Highway 17 to Manila. It moved so swiftly that the Japs, who had mined the bridges, didn’t have time to blow them. It was not until the troopers reached the foothills of Tageytay Ridge that the fleeing Japs made a stand. From that point on it was tough going. Mountain guns and mortars bracketed the highway. The Japs were looking down the troopers’ throats, but they pushed on up the ever-ascending Highway 17.

On February 3 the 511th made its first combat jump—the third parachute combat jump in the Pacific war. The jump brought about the capture of the Ridge, and “The Angels” headed for Manila, 30 miles away. There was a stiff battle at Imus, ten miles from the Manila suburbs. The troopers broke through the Genko Line, and moved toward Nichols Field. The battle for the airstrip was one of the meanest of the Luzon campaign. Pillboxes dotted the installation, protecting all roads leading to the field. Dual-purpose ack-ack guns abounded. From the outer rim of the field’s defenses the Japs poured in fire from five-inch naval guns. Following the fall of Nichols Field, the troopers aided in the capture of Fort McKinley.

Of all the llth’s operations on Luzon, the most daring was the hit-and-run raid on the Japanese internment camp at Los Banos, where more than 2,000 American and European nationals were held. In a combined paratroop and amphibious landing, the troopers struck 25 miles behind the enemy lines to overwhelm the Jap garrison. The Americans sustained only one casualty—a slight shoulder wound suffered by a parachutist.

Oh, yes—one other thing about the men whom Tokyo Rose reported “killed” at the Leyte airstrip. Some of them were among the members of the 11th Airborne who, the following August, achieved the honor of being the first American soldiers to set foot on captive Japan, and who proudly formed the guard of honor as General MacArthur arrived to inspect his first occupation headquarters in Yokohama.

There are 23 soldiers of the 11th Airborne Division World War II still listed as missing in action. 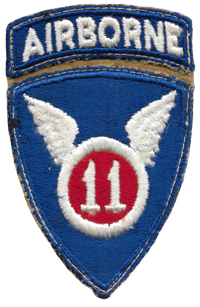