Several weeks after V-E Day, it was announced from Europe that the 106th Infantry Division had been assigned the job of guarding thousands of German prisoners of war. No outfit had a better right to claim that job than the “Golden Lion” Division, for the 106th, in the war’s major setback for the Allies in Europe, had more of its men captured than any other American division.

The story began in mid-December, when the 106th, which had left the United States only two months before, was moved up toward the front and—because it was without any previous combat experience—assigned to a supposedly relatively quiet sector in the Ardennes.

Then it happened. Rundstedt, who had secretly been plan-ning an all-out counteroffensive, gave the word, and the massed might of the German armies smashed into the American lines. There is always one point at which the attack is heaviest—and that was the point at which the 106th was stationed.

The 106th was deployed along a rocky, wooded ridge called Schnee Eifel, near the city of St.Vith, with its men scattered along a 27-mile front. In the foggy dawn of December 16 the Germans began their attack, with a tremendous artillery barrage. The pro-Nazi residents of St.Vith, tipped off in advance, had scurried into their cellars, and the fury of the German barrage crashed into the positions of the 106th. Then came the enemy tanks and the enemy infantry, and, along with them, English-speaking German soldiers disguised in captured American MP uniforms, to add confusion to the scene.

For two ghastly days, the 106th fought back, though vastly outnumbered by die oncoming enemy. The 422nd and 423rd Infantry regiments held out as long as they could, without food, water, or ammunition, and finally sent through a last radio message that they were destroying their equipment. Then there was silence. The remaining regiment of the division, the 424th, hung on grimly near St.Vith, and helped to keep the Germans from overrunning that vital communications center.

But the Golden Lion wasn’t licked yet. Moved to the rear to re-organize, and with its ranks filled with replacements, it stormed back into the Battle of the Bulge in January and stayed in action till the counteroffensive had been crushed. Later it took up the fight on the south flank of the First Army’s sector in the Siegfried Line, and in March it was pulled back again, this time to Rennes, and held in reserve.

As German resistance began to crumble from north to south, the 106th was brought back toward the lines to help cope with the terrific problem caused by the thousands of prisoners falling into Allied hands. By the middle of June, the Golden Lions had control over 16 prisoner-of-war enclosures with 910,000 inhabitants—more than 15 times the total number of Germans taken by the AEF during World War I. Ardennes had been avenged.

There are 61 soldiers of the 106th Infantry Division World War II still listed as missing in action. 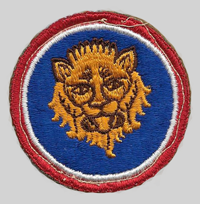