"Nothing in hell must stop the Timberwolves" is the slogan of the 104th Division. Nothing in Germany did. From the moment it went into action as part of the Canadian First Army in Belgium on October 23, 1944, the “Timberwolf” Division compiled an impressive record of wartime achievements. Under the command of Major General Terry de la M. Allen, already famous for his leadership of the 1st Infantry Division in North Africa, the 104th had scarcely arrived in Europe when it began to make news, by its realistic training in forward areas which had been cleared of the enemy only a short time before. In Holland, the Division spearheaded the drive of the British I Corps across the Mark River and to the Maas River. Both British and Canadian forces expressed official admiration of the courage and enthusiasm of the Timberwolves.

Moving over to the American First Army front, the 104th relieved the 1st Infantry Division at Aachen and, on November 16, jumped off toward the Roer River. In ensuing battles, it distinguished itself by the effectiveness of its night operations. It surprised its own superiors by the speed with which it conquered the great industrial cities of Eschweiler, Weisweiler, and Stolberg, prompting Lieutenant General J. Lawton Collins, commander of the VII Corps, to pay tribute to the “leadership, dash and sound training of the division.”

On its way to the Roer, the 104th forced a crossing of the Inde River, in a brilliant series of night attacks that confused the Germans and upset their defensive plans. In a few days, the Timbervvolves had cleared the entire sector assigned to them between the Inde and the Roer, and had won further credit for themselves by their skill in taking Lammersdorf, Inden, and Lucherberg.

During Rundstedt’s breakthrough, the 104th occupied a defensive sector on the Roer, opposite Düren, remaining there until nearly the end of February, with the principal mission of preventing the Germans from advancing again in Aachen. That job completed, the Division headed toward Cologne, seizing Düren and Huchem-Stammeln on the way, and taking their main objective on March 7. Once again the Timberwolves’ prowess at night featured their progress.

Fifteen days later, the 104th crossed the Rhine at the Remagen Bridgehead, and in nine days advanced a total of 193 miles east and north, ending up at Paderbom. Linking up with the 3d Armored Division there, the 104th halted briefly and then started off on anôther quick advance, this time covering 175 miles in 15 days and culminating at the Mulde River. On its way the 104th crossed the Weser and Saale Rivers, and captured Halle, Bitterfeld and Delitzsch.

Finally, just before V-E Day, the 104th linked up with the Russians along the Elbe River.

There are 19 soldiers of the 104th Infantry Division World War II still listed as missing in action. 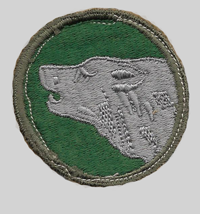