On the first celebration of Infantry Day, June 15, 1944, a battalion of the “Century” Division marched smartly through the streets of New York City. It was an impressive parade, and the men of the 100th were glad that they had been singled out to put on the show. It wasn’t their first distinction, either. A few weeks before that, one of them, a technical sergeant, had been picked as the first recipient of the Expert Infantryman Badge.

But the 100th still wasn’t too happy. Nine days before, thou-sands of Infantrymen like themselves had stormed the beaches of Normandy, and the Century Division was still a parade-ground outfit in the States.

A year later the story was different.

Resting in Europe after V-E Day, the 100th could look back on a distinguished combat record of its own. The technical sergeant who had had a badge pinned on him by Lieutenant General Lesley J. McNair had turned it in for a better one—the Combat Infantryman Badge. And he wasn’t a technical sergeant any more; he had won a battlefield commission. And on many a shirt that had been plain in New York’s parade was pinned a Purple Heart.

The Century Division landed in Southern France on October 20, two months after the Allied invasion from the Mediter-ranean. The three veteran infantry divisions that made that landing—the 3d, 36th, and 45th—had had litde rest in many months of battle, and the 100th was rushed up to the line. Eleven days after it reached the European continent it relieved elements of the 45th on the Seventh Army front, south of the Meurthe River in eastern France.

Crossing the Meurthe at Baccarat, the Division captured an important German supply base at Raon-l’Etape, and, ripping through the German defensive positions in the lower Vosges Mountains, took Moyenmontier, Senones, and St. Blaise. By seizing and holding Schirmeck, the 100th prevented the enemy from moving down through the Bruche River Valley and endangering the subsequent Seventh Army drive into Alsace and to the city of Strasbourg.

As winter came on, the Centurymen swung north toward the Maginot Line. At the south end of the line, the most heavily fortified point was the town of Bitche, protected by the strong-hold of Fort Schiesseck. On its way to Bitche, the 100th en-countered fanatical opposition from the Germans, and when it got there, it found itself up against a series of four-foot concrete emplacements and numerous blockhouses, all backed up by thundering batteries of German artillery. Fort Schiesseck itself, a bare ridge dotted with blockhouses, was a tough nut to crack, but the Century division reduced it despite direct hits from German 88s on advancing Infantry units, despite hard, snow-covered ground, and despite a seemingly endless series of fierce enemy counterattacks.

When it was all over, the 100th received high praise from General Jacob L. Devers, 6th Army Group commander. “Your great accomplishments,” he said, “forced the enemy to give up the offensive action on your front.”

Afterwards, the 100th assisted materially in cleaning up the enemy forces in the huge Saarland pocket between the Third and Seventh Armies. On the second celebration of Infantry Day, it could look back on a hard job well done.

There are 14 soldiers of the 100th Infantry Division World War II still listed as missing in action. 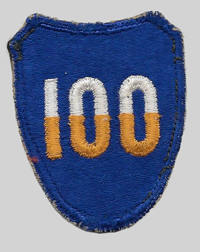